Thanks to Keely, Tuesday’s can be a free-for-all…which is a good thing, because my brain is foggy today, so trying to put together a coherent thought would be a huge stretch. Trust me.

Only 79 days of summer left until school starts for the Princess Nagger. Yes, I’ve already started the count down. Enough said.

Yesterday since Hovering Hubby went back to work after his week-long stay-cation, I had big plans of kicking back and starting to get caught up on leaving witty comments all over the blogosphere since I am severely behind in doing just that. My computer had other plans. I spent too much time this past weekend (in between working like a maniac out in the yard) trying to locate some file folders that seem to have mysteriously disappeared off my portable hard drive – so yesterday I decided to give in to Windows and let it scan said portable hard drive. It. took. forever. And the end result? Those darn files are still missing. Kaput. Gone. Of course I haven’t backed up my back up yet, and luckily it’s only the file folders that house the weekly updates I do for a church website, so that stuff can be recreated if necessary. Hopefully it won’t be necessary.

Did I mention there are only 79 days of summer left before school starts?

It seems that now you can’t hold ‘It’s a school night!’ over her head, Princess Nagger has gotten into this new sneaky way of prolonging bed time. She sneaks out of bed and gets distracted playing – when she gets busted, she claims she’s brushing her teeth…again. I had finally drifted off to sleep last night about 12:30 am, when I heard slam! Her bedroom door closing. Loudly. Of course I had to get up and find out what was going on. Hubby was obliviously sound asleep snoring loudly. OK, potty break is over – go back to bed. Then about a half hour later again…slam! She wanted to brush her teeth…again. Go back to bed. Then the whining commences – she wants some stuffed cow that was downstairs she attempted to sew a hole all by herself (forgetting to tie a knot in the thread, so the hole is still there). After a bunch of back-and-forth about it waiting until tomorrow, she finally stayed in bed.

Only 79 days until I can use ‘It’s a School Night!’ to get her to stay in bed and let me get some sleep.

In 17 days we head out on our annual road trip to visit our friends in Louisiana for almost 2 weeks…we always have so much fun, and Princess Nagger loves playing with their kids who are 10, 6, and not-quite-one. Actually, this will be the first time we get to meet the ‘not-quite-one’ baby girl, since she was still incubating last year when we visited. She’s apparently in the crawling stage and follows her brothers everywhere, so Princess Nagger has offered to distract her from annoying them – you know, when she’s not doing the following and annoying.

I’m not sure how I’m going to handle being offline for 14 days straight – our friends don’t have any sort of internet connection, and finding a wifi access point somewhere in their vicinity is sketchy at best. I’m hoping I can create some scheduled posts to keep y’all entertained while we’re gone – maybe I should recruit some guest bloggers to keep things lively while I’m gone. Any volunteers? 😉

The friends we’re going to visit are a lot of fun – my hubby and her hubby are like kids in a candy store when they go shopping for fireworks to set off on the 4th of July…they try to out-do themselves every year and I’m sure this year will be no exception.

That reminds me of a funny (to me, maybe not to her) story… She works outside the house while her hubby works from home…they have 2 rambunctious boys you have to keep an eye on at all times – of course her hubby isn’t really diligent on keeping a close eye on them, and to give him credit, you’d think sending them to their room for a while would be a ‘safe bet’ they won’t get into trouble. Well, her youngest, who’s now 6, got hold of some scissors. Not only did he give himself a reverse Mohawk (two days before his Kindergarten pictures were to be taken), but he also took the scissors and cut his comforter into shreds…when my friend got home from work and checked on the boys in their room, imagine the total mess of cut/shredded comforter all over the bedroom – with her cute little son sitting in the middle sporting his reverse Mohawk. Fun times for her, I’m sure! 😉

Last Thursday we braved the inundation of rain Mother Nature sent us and drove the hour-plus down to Maryland to visit hubby’s dad at his retirement home – he’s 87 and hanging in there, and always loves to go out to his favorite diner when we come down. 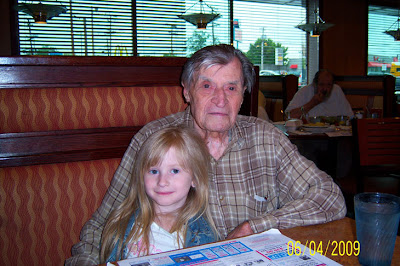 If you happened to read my Tag Schmag post this weekend, you’ll know why this next randomness is sort of ironic… While I was running the tractor around the Back 40 on Sunday, it ran out of gas. If looks could kill, hubby would have dropped dead on the spot when I had to come all the way up to the front to retrieve the gas can. What part of ‘The tractor’s all ready for you’ did I miss? If it’s ‘all ready’, I’m assuming it’s also full of gas. The gas can we have is one of those with the ‘safety spout’…yeah, so much for ‘safety’ – that sucker leaks gas all over the place when you’re trying to feed the tractor…all over the tractor, all over me…not such a beautifimous smell when you’re walking around smelling like gasoline. Gotta match?

Clearly I need more coffee. Head on over to Un-Mom for some awesome zombie randomness. Give yourself a break today and join in the fun…since she’s still feuding with Mr. Linky, be sure to leave your post link in the comments so everyone can stop by for a random visit.