Some of you know that I do bi-monthly grocery shopping…which means twice a month I venture forth on a day of marathon shopping and get all the shopping done for 2+ weeks (the ‘+’ is dependent on the number of days in the month, and where the first and last days of the month land…) Anyhoo… Since Monday was the 15th, that meant it would normally be the day I do my mid-month bi-monthly shopping. But Monday I had to drop Travis off at the vet and hubby forgot to give me the grocery money, so I didn’t do the shopping that day – on a gorgeous sunny day.

Then Tuesday I had to pick Travis up from the vet, so that nullified the shopping. Which left Wednesday as ‘the’ day since we were starting to run out of important things. The weather forecast was actually in my favor for that particular day – after many days of heat and humidity speckled with some rain and thunderstorms, Mother Nature was going to deem Wednesday a great day with the high’s only getting to the mid to upper 60’s. Perfect grocery shopping day – not too hot and not too cold…juuuuuuussst Right.

First stop – Wal*Mart Supercenter…so we can get the cheapo grocery and necessities we need that we don’t need to buy in bulk. Princess Nagger is too big now to sit in the top of the cart. She’s been complaining for the last couple of years she doesn’t like sitting in that seat portion…her way of wanting to walk alongside the cart, try to help push it, or play hide-n-seek at the most inopportune times. So usually I used the promise of a Happy Meal at the conclusion of the shopping if she sat in the cart and was good. That always worked. Actually, if I’m being honest here, she still fits that seat OK, but I’m too short to see over her head anymore since she’s gotten taller. And I refuse to wear my 3-inch heels to grocery shop in because, well, I’m not that mom. 😉

So I decide to brave the ginormous cart – you know the one…with the toddler/kid/goof off seats behind the cart. I figured I can maneuver those ginormous race car carts at BJ’s like the best of them, so this shouldn’t be too much different. Except you have plenty of aisle space at BJ’s – Wal*Mart likes to keep their aisles ultra narrow. And the shoppers tend to hog the aisles and refuse to move out of the way, even when you say ‘Excuse me…’

And guess what? I worked that cart like a champ….didn’t run over anyone’s toes, didn’t run into any other shoppers or their carts (well, OK, a few close calls that drew disapproving looks from the grannies…), for the most part, all was good. Until we were ready to leave. It was pouring rain outside. A torrential downpour. Raining cats and dogs.

I was thisclose to turning around at the entrance and going back for an umbrella. But Wal*Mart keeps their store sweltering hot, and I had ice cream and other frozen goodies in jeapordy. Not to mention the terminal wait at the registers because Wal*Mart never makes good on their promise to always have enough cashiers ready to take your money. So I made a mad dash. With the giant cart. And made it safe and sound. Ha! I bet you were thinking I finally crashed it into something or someone….sorry to disappoint. I’m sure I did make quite a sight actually running with this ginormous cart, but luckily there were no bloggers in the parking lot to document that event.

I did, however, remember that I had my camera in my pocket, so I made Princess Nagger sit in the cart for a few minutes longer in the rain so I could get a picture…especially since she kept saying it was the best day of her life since she got to ride in this cart: 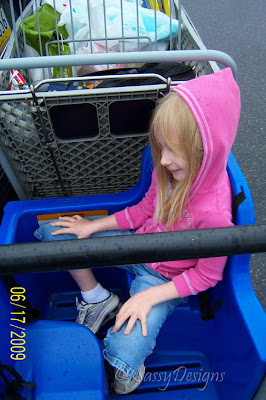 At least the shirt she wore had a hood, so she had a little bit of protection from the falling rain. And I did lift the tailgate of my mom van and parked the cart under it to keep the raindrops off her…at least she didn’t get too wet.

When we got over to BJ’s for Round 2 of the Marathon Shopping, the sun was struggling to come out between the raindrops. I figured my wet rat look should fluff out by the time we got done in BJ’s. Little did I know that Mother Nature was realizing she was falling down on the job and not having it rain as hard as it was earlier. So she opened the clouds a little further. Just as we got done with our shopping at BJ’s. Another mad dash with an equally ginormous shopping cart – this one with what Princess Nagger referred to as a ‘police car’ (so as we went down the aisles of BJ’s, she kept making an annoying siren sound and saying “Stop! In the name of the law!”) Of course I forgot to take a picture.

The downpour continued all the way home and continued as I made trip after trip unloading my loot for the day. As soon as I moved my mom van from blocking the driveway to it’s usual space in front of the barn, the rain stopped. Thanks Mother Nature. Of course I didn’t take a picture of my drowned rat appearance. I’m not that brave. 😉

And the rain/thunderstorms we were supposed to have yesterday? (which was why I opted to do the shopping on Wednesday…because there was an 80% chance of rain for Thursday…) It poured rain in the early morning hours, then the clouds parted and the sun came out…and I swear I heard a ‘Neener, Neener!’ coming from the general vicinity of Mother Nature.

24 thoughts on “Mother Nature is still at it…”