Super Keely at The Un-Mom promotes Randomness on Tuesday’s. I guess that means she’s an enabler, since she enables us to be Random just for the sake of a Tuesday. If you haven’t tried it out yet, you really should – the first Random Tuesday is free. 😉

An update the the rant I posted earlier this morning – I spoke with the Postmaster who instructed me to file a formal complaint online so he can drag pull the lazy incompetent sorry excuse of a mail carrier into his office for a discussion and subsequent disciplinary action. I’ll update as that happens, since he won’t get the formal complaint until tomorrow. I went a step further and filed a formal complaint of ‘mail tampering’ with the Postal Inspector, citing our mail carrier as the ‘suspect’ and am in the process for filing formal complaints with the Attorney General’s Office and the Better Business Bureau. We’ll see how this one turns out. 6 years of issues and headaches is 6 years too many.

Mother Nature is still playing tricks on us – here it is closing in on the end of May and we’re still getting ‘frost advisory’ alerts (like for this morning) after getting a heat wave, then endless rain, then more heat followed by lows in the low 30’s at night…she can’t seem to make up her mind what time of year it is. I’m so far behind in my creative planting because of the frost risks (and incompetent delivery of live plants by our lazy mail carrier) I’m not sure how my garden will shape up this year…

Last week we were all a sight to behold having caught the plague and all. I can’t even try to tell you how miserable it is to have a flu bug and not be able to toss your cookies to feel better – you just have to wait for it to work its way through your system. Yeah, fun times. I can’t toss any cookies because I had esophagus surgery last year to finally resolve the 20+ year acid reflux issue I had – the surgery was a success, no acid reflux to be had after that. But it also prohibits you from throwing up. Which means I have to be very careful if I were to go out and party and perhaps drink too much…I haven’t been in that mode in quite a while, but now that I have to be careful, it makes you want to see how careful you really have to be…well, OK, not really. But the thought has crossed my mind to experiment. Luckily I’m smart enough to abstain from putting myself through any scientific experiments. Mostly. For now.

Last Wednesday morning I was in the Summer House trying to focus on my computer screen and throw a post up so people weren’t figuring I was throwing in the towel since my presence had been fairly sparse in the blogosphere last week. Once I squinted enough at my screen and silently cursed how badly I was feeling and the headache that was making it difficult to focus on the glaringly bright screen, I relocated myself and my laptop to the house. I happened to glance out the window and suddenly discovered the reason behind the very large bang I had heard shortly before: 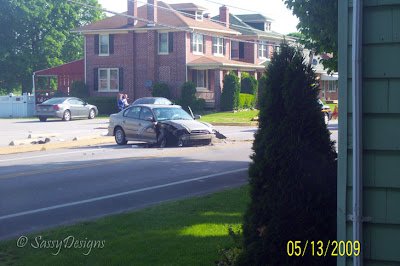 I took these pictures through my front side window since I was looking like death warmed over and didn’t want people to think maybe I was part of the crash. It also made me realize I really need to wash the outside of my windows. 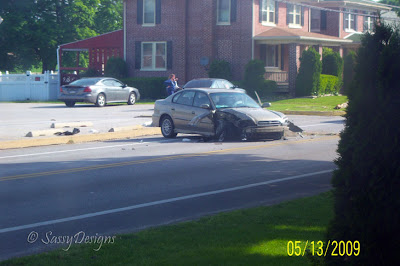 The local volunteer fire company arrived to do the clean up, parking right out front with the hum of the engine causing quite the stir: 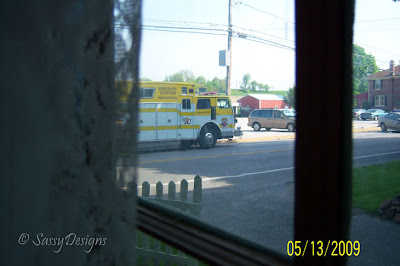 Luckily it appeared that no one was seriously hurt in the crash, except for the unsuspecting telephone pole: 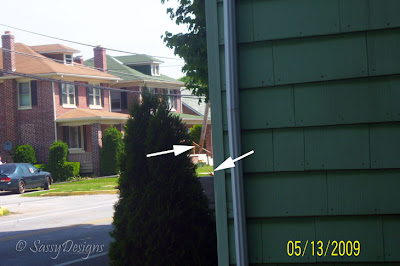 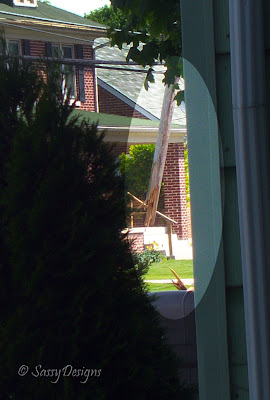 The road was closed for a couple of hours for the assesment and clean up, but once the car was hauled away they opened the road and the telephone company had to come out and replace the pole which took pretty much the rest of the day. 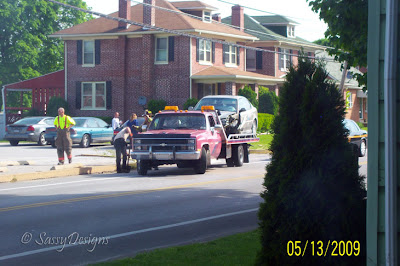 Our next house will definitely not be in such close proximity to a busy road – luckily our back yard and ‘back 40’ are far enough from the front and meet up with farmland so we can enjoy peace and quiet away from the busy street.

Yesterday Princess Nagger’s kindergarten class had a ‘field trip’ to the high school swimming pool to swim. She had such a great time, so now she’s in mega nag mode about getting a swimming pool for our backyard this year. We had one of those 25-foot ones that you inflate the top and as you fill it with water it rises, and it worked great to cool off from the heat. We’d empty and deflate it at the end of the summer, then replant the grass it killed to start fresh the next year. It lasted 2 years because hubby thought the second year it was a good idea to rinse it off after taking it out of the barn, spreading it out on the gravel driveway to dry before setting it back up again.

While the initial idea was a good one, him letting the Princess Nagger run around on it with shoes on was not. We used it that summer, but had to keep topping it off with more water because of the hole that was created near the bottom that we couldn’t patch effectively and the slow leak was annoying. That fall we cut it up and used the bottom of it as ‘Crocodile Lake’ for Princess Nagger’s Dora the Explorer Birthday Party I did for her. We have yet to replace it, so last summer’s heat was a little less bearable without the pool option. If we switch from frost advisory mode to extreme heat and humidity, it’s going to be a must. That is if Mother Nature gets her act together.