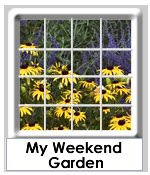 Harriet at I Am Harriet has started a fun Virtual Weekend Garden Tour, and since I love to garden I thought it would be fun to join in. I wasn’t able to participate last week because Mother Nature deemed it necessary to water my garden…apparently she thought it needed to be watered 8 days in a row.

She finally gave us a break, so hubby and I were finally able to mow the grass that has been growing like weeds, but could only mow about half of it since the “Back 40” gets flooded when there’s that much rain – so I ran the tractor around trying not to sink in the soft ground, but was happy to see the weed’n’feed was contributing to a better ratio of grass vs. clover and crabgrass! I’ll be working back there when the ground dries more, since that’s where my greenhouse is and I have more fencing to put up to support the new grape vines I have on order along with the blackberry plants I’ve got started in pots up front. When I am able to get back there to work on some stuff, I’ll take some pictures of the progress.

This is a picture of the backyard closest to the house and Summer House – we have a brick patio, and off to the right of that is where the hand dug stone well is. When we moved into this house, there was a couple of cement slabs covering the opening of the well (for good reason), topped with a rusty 5 gallon drum lid. Hubby removed the cement slabs and used the loose bricks he found around the property to create a smaller section to mimic the patio and put a hand pump that actually draws water from the well. I didn’t notice until after I took the picture that he had left a Pepsi can sitting on top of the pump… 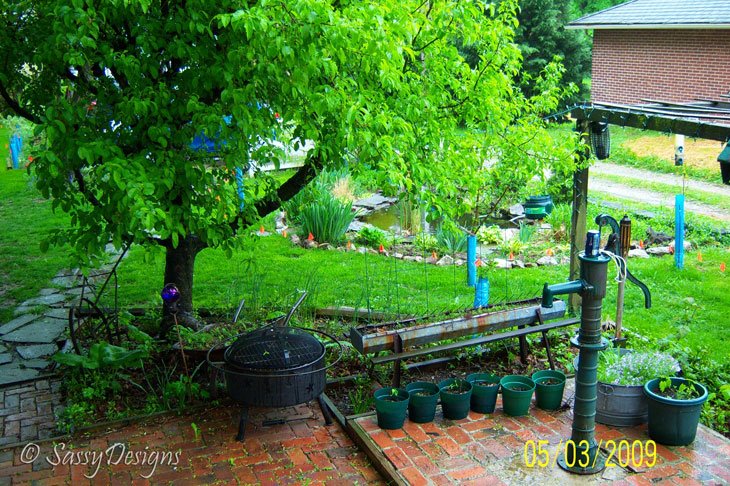 Around the three sides of the extra brick section is a raised flower bed, then around and just beyond the apple tree is a triangular section that is also part of my main flower bed. There are plenty of weeds over on that far side, with all the rain we’ve been having I haven’t had a chance to get out there and clear it out to get ready for the new plants I have on order. Meanwhile, we’re still on Vole Patrol since the voles are still running rampant (in spite of the extra activity of the neighbor’s Pit Bull peeing in my flower beds…you’d think that would have scared off the voles, but apparently not). So one-third of my flower bed around that brick section has been devastated by the pesky voles: 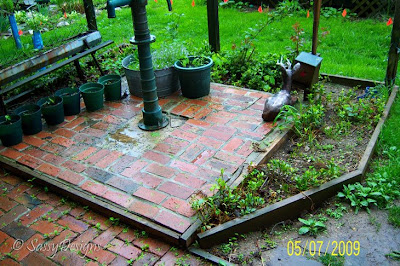 This section was abundant with plants last Spring – I had even planted some new stuff in there along with the Pachysandra. There used to be white and pink tulips, along with some Black Columbine, Chameleon Houttuynia and a few other unique and cool plants I can’t remember what they were…the voles have eaten them all, and most of the Pachysandra, too. Of course they left weeds behind. 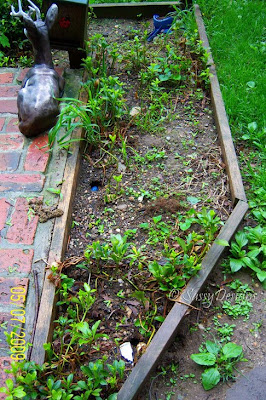 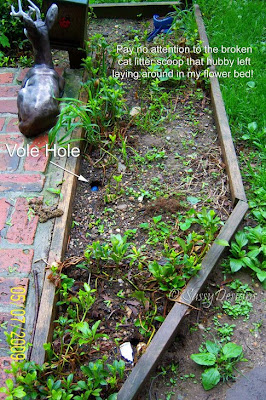 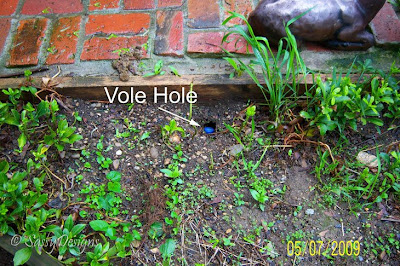 Today hubby went out and dug that whole section up – and lined it with doubled-over chicken wire (so the holes would be smaller and the voles won’t be able to fit through). Then he grabbed some more Pachysandra from other areas and distributed them (I’m personally not a huge fan of Pachysandra as a ground cover, when I think ‘ground cover’ I think more low to the ground and complimenting any taller plants planted…this stuff is gangly and can be raggy looking…so I’ll be redistributing what hubby put in there today when I get the new plants I have on order). I still need to get additional top soil to top it off, and we’ll be doing a round of mulch all over once I get all the weeds pulled and the plants planted (probably over Memorial Day weekend): 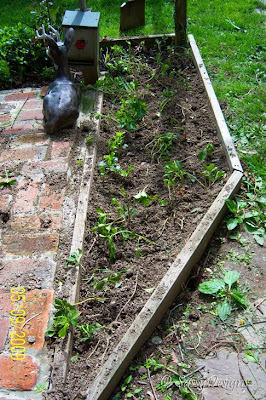 Meanwhile the plants we put around the pond last year are doing well, especially now that we moved the invisible fence to exclude it (no more doggies rolling in the plants – apparently it’s the cool thing to do…) 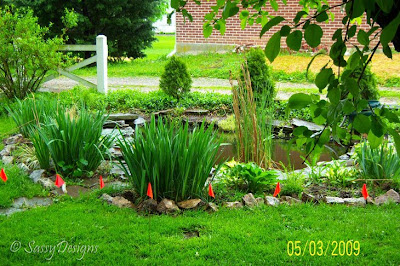 The purple irises in the back have been blooming, while the ones in the front are still in bud formation: 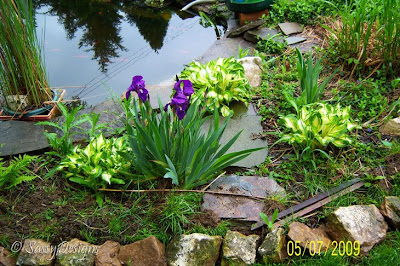 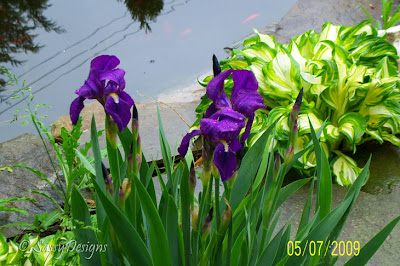 The back section between the house and the Summer House was always a mess – usually filled with dead leaves from the giant maple tree towering overhead, or branches and twigs that get dislodged by high winds. Hubby spent some time clearing all of that out – found thousands of baby maple tree saplings growing under the leaves, so he tried to clear out what he could, but those little buggers are stubborn. If anyone wants free baby maple trees, let me know – I’ll dig ’em up and ship them to you. 😉 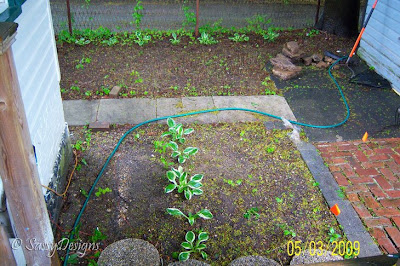 He planted a row of Hosta along the small chain link fence section that separates our property from our neighbor’s driveway, and another row along the side of the house. They’re doing really well, since they are a good thing to plant when you have total shade in an area. We were lucky, we got a ton of Hosta – compliments of Grammy Joyce and Papa Eddie – they have a big row of it next to their house and have to thin them out every so often, so when they did that last year, they gave us a bunch of starters to implement in our shady (and not-so-shady) areas. I really appreciate how hardy they are and can grow under any condition. 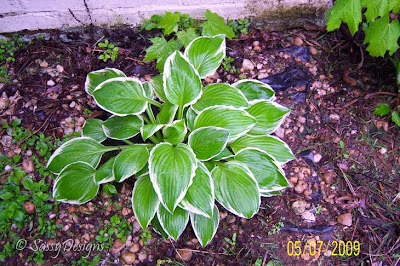 We have a really long front porch and there was never any defined flower beds out there – grass grew up to it and hubby hated having to mow and weed-whack that section, so he dug out the front and created flower beds on either side. We have a short sidewalk that goes from the front porch almost to the road, then a sidewalk that connects to the first one and runs around the side of the house to the back. The section between that sidewalk and the front porch was the perfect setting for a flower bed. We used railroad ties on the other half (not pictured) to make it the same look and size as the one on this side. Currently we only have Pachysandra and Irises planted, but I have other plants on order to fill in and create some nice colors. 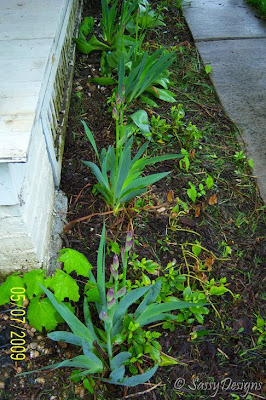 One of the irises on the corner that has yet to bloom – notice the maple tree trying to grow from a rouge ‘helicopter’ seed: 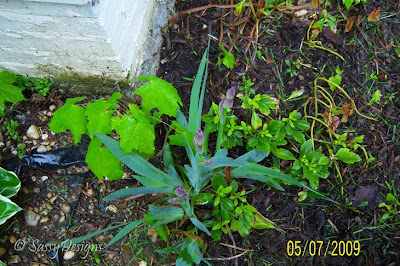 And my favorite flower of all…she thought it was funny I was hurriedly taking pictures of the front while we were waiting for the school bus, and wanted me to take a picture of her – of course all the ones I did take her eyes were closed because she was trying to make funny faces…but I did catch her off guard for one great picture: 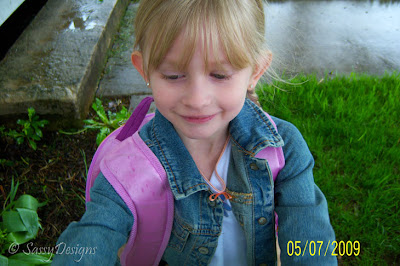 That ends the tour for this week…I have some new plants on order to replace the ones that the voles have devoured over the winter – hopefully I’ll get them soon so I can repair my main flower beds around our brick patio. Stay tuned to see how that all shapes up this year! 😉

Stop by Harriet’s to see more Virtual Garden Tours – join in the fun too!

My Weekend Garden – When Hard Work Pays Off

It’s been just about a month since I last got to participate in Harriet‘s fun Virtual Weekend Garden Tour – Mother Nature wasn’t cooperating, but the last couple of weeks she’s taken pity on me and given me some decent … Continue reading →

This week went by so fast – I even lost track of what day of the week it was at one point! It’s time once again for Quotable Sunday! Toni, from A Daily Dose of Toni has this great weekly … Continue reading →