Keely over at The Un-Mom has a fun weekly Random Tuesday thing going…it’s Tuesday and you know the drill…I love Randomness! 😉
Well whaddaya know…it’s Tuesday morning and I didn’t have my Random Thoughts all ready to rock’n’roll to automatically upload in the wee hours of the morning. So forgive me if my Random Thoughts really turn into Rambling Thoughts… I’m working on my first cup of coffee y’know. 😉

So we had 60 degree weather on Friday, but woke up to a dusting of snow on Sunday morning. Yep, Mother Nature is still doing her best to mess things up. I spent a majority of the day ignoring the bright red icon in my toolbar alerting me to a weather warning, finally clicked on it late afternoon to discover there was a Nor’easter headed our way. We were in line to get either 1-3 inches of snow overnight, or 3-6, depending on if the high winds blew the storm further West from the coast. We woke up to no change yesterday morning, but then it did start to snow lightly and Princess Nagger’s school called with a 2-hour delay which meant Modified Kindergarten for the Princess Nagger. Of course it started snowing even harder by mid-morning, so the school amended the delay and opted for being closed. Princess Nagger was thrilled to have a snow day, but the winds were so blustery it wasn’t conducive to a fun day playing out in the snow.

Because the winds were not cooperating and blowing the 5-6 inches of snow we did end up getting into random drifts, the front porch and steps were buried under a deep drift of snow. So of course when our lazy mail carrier stopped by to drop off an Express Mail package for me, she didn’t bother getting out to knock on the door (she’s supposed to honk her horn and allow enough time for me to exit the back door and walk around to the front of the house, but she didn’t do that) so she just left a notice in my mail box instead. Of course the sidewalk around the other side of the house was still clear of snow, as was our back steps and porch because we use those to enter and exit, not the front door. But she doesn’t like our dog. She thinks he’s vicious. You know, because he jumped on her once with his front paws when he was a puppy. 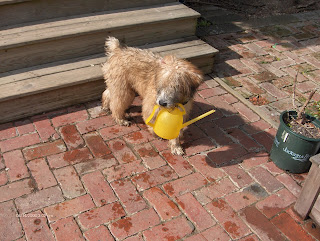 Speaking of puppies, Travis is growing fast – and getting more mischievous. Yesterday he stole Princess Nagger’s Zoo Pals knife she was using to cut her chocolate chip pancakes with, and was running around playing ‘keep away’. It was hilarious to watch – he was ‘prancing’ as he ran away, then paused to allow the Princess Nagger to almost catch up to him, then zoom off. I felt bad for laughing so hard, but it was funny to watch – and especially since Princess Nagger was shrieking his name as she tried to catch him.

Out of the blue Friday evening, Princess Nagger thought she was poisoned:

I burst out laughing, of course, then asked: “What do you mean by ‘poisoned’”?

Me: “Itchy? Why do you think that it means you were poisoned?”

Me: “That’s usually not a sign of poisoning…and you haven’t been around poison ivy, so you’re good there… Where do you itch?”

PN: “On my leg, and here…” (indicating her wrist as she scratched for dramatic effect)

Me: (inspecting): “Hmmmm…no rash, no red spots…I think it’s pretty safe to say you’re not poisoned. Should we call the doctor?”

PN (with a furrowed brow and shaking her head) “Uh, NO Mama…you could probably rub that stuff on there…you know that stuff that gets rid of the itch…I think that’s why the dots are here…or something bit me!”

Me (looking closer…noticing two small bumps) “You know, that almost looks like mosquito bites…how odd! But then again, it was 60 some degrees today…winter, uh-huh, right…”

Then Dada got home so she forgot about her itch as she was distracted by the Cracker Jacks he brought home.

Speaking of Cracker Jacks, whatever happened to the cool toys they used to have in there? Now it’s just mundane stuff. I remember getting cool little plastic rings or tattoos in boxes of Cracker Jacks when I was a kid – who cared about the candy coated popcorn, we just wanted to see what the cool ‘prize’ was. Now all you ever get is a piece of paper or cardboard with writing on it…not so much fun for kids!

Speaking of fun for kids, Princess Nagger announced that she has chosen what hobby she would like to have.

Me: “Really? What did you decide on?”

PN: “I’ve decided to be a Collector.”

Me (laughing): “OK, but what will you be collecting?”

PN: “Everything. That’s what a collection is!”

Me: “No, that’s what being a pack rat is…you should probably pinpoint a specific collection – you know, like how I collect deer. Do you want to start a giraffe collection since that’s your favorite animal?”

PN: “Well, it’s my second favorite animal now, Mama, my first favorite is horses so I can annoy Dada with them (he’s afraid of horses). But that’s not what I want my ‘hobby’ to be – I want to collect things. And we’re going to have to buy some tubs, you know, so I can put my collection in them. And maybe we should label them so I can remember what goes where and so that if I need to find something I can find it right away.”

Me: “That’s what you do now” (indicating the 3 small tubs stored under the coffee table) “except that they’re not labeled, although I mentioned we should do that since you’re always looking for something and leaving a mess, then I’m having to reorganized and clean up said mess.”

PN: “No, Mama, I would need bigger tubs for my collection – with lids. And lots of them.”

Me (laughing nervously): “Oh, and where do you plan to store these tubs with lids?”

Me: “Oh I will, honey, I will…” (secretly hoping that this ‘brilliant’ idea of hers will pass and be forgotten quickly.)

Well, that’s about all the randomness I have for this morning…I need more coffee and the Princess Nagger thinks she’s coming down with the plague because she has a sore throat and diarrhea… I’m hoping the latter is because of the antibiotics she’s still taking for her previous infected tooth issue (which is all better now), and not because she’s coming down with the plague. 🙂

Looking to join the randomness? Look no further, click over to Keely’s place now.