Rockstar Keely over at The Un-Mom hosts this fun weekly Random Tuesday thing, and if you haven’t jumped on that band wagon, you don’t know what you’re missing!

This week life returns to ‘normal’. Starting today. Because Hovering Hubby is back to work after a week off of doing nothing, and Princess Nagger is back to school this afternoon after her day off yesterday for ‘teacher inservice’. So of course the next four days are going to be fast paced catch up mode for me.

Except really not. Because it’s time for the bi-monthly grocery shopping which takes longer than 2 hours, so I have to split it over two days and do half this afternoon and half tomorrow afternoon while Princess Nagger’s at school – speed shopping through the stores and race back here to make sure I’m home for the Princess Nagger’s return bus. Princess Nagger not being a morning person and being in afternoon kindergarten really messes with my morning person self… Next year when she’s in school full days it will give me so much more ‘freedom’ to get the mundane stuff done in a timely manner eventually. So next week will turn into major ‘catch up’ week from last week’s interruptions. Unless something else comes up between now and then. You know, like blogging. 😉

Speaking of blogging, I actually am starting to get back on track now that I’ve finally decided to quit messing with my blog layout and stop incorporating crappy comment things that don’t work and only create major headaches magical disappearance of comments. Now that the comment thing has been put back to ‘normal’, I’ll be able to actually reply and visit. Besides, Justine was really on my case for the past couple of weeks to give JS-Kits the boot again, and I don’t know if you’ve been over to her blog, but she throws that spotlight on her sister all the time, I didn’t want her blinding me with it at some point. So you’re welcome, Justine. 😉 If y’all have a minute, you should stop over there and harass her for me. I’d be forever grateful. 😉

Speaking of harassing, I’ve been sporadic on my visits to many of you wonderful bloggers – don’t take it personally, I haven’t forgotten about you, the comment thing made life difficult for people to leave comments and for me to figure out where to go to pay a return visit. And it’s hard to read a blog then leave an intelligent or witty comment when Mr. Interruptus is hanging around doing nothing except interrupting me mid-thought.

Seriously, he had all these big plans of getting stuff done last week – like pruning the apple tree with his chain saw, getting the area around the pond all cleaned up and ready for Spring, and helping me haul my wine carboys down to the basement so they’re not taking up valuable space in the dining room. Not one of those things got done last week. He did, however, get the chapters done on the electronics book he’s writing and got the publisher off his back, so he did get something done, just not the things on his list. He is thinking about taking another week off very soon since he has so many vacation days to use or lose – we’ll see if he gets stuff done then.

Of course I can’t blame him for not getting the outside stuff done – it was kinda cold for outside activity, so we kept the activity indoors instead. I’m sure the neighbors appreciated that.

Speaking of weather, we had a doozy of a thunder/lightning/monstrosity hail storm Sunday – if I wasn’t such a big chicken I would have been outside taking pictures of the golf ball dime sized hail beating up everything outside. Our power went out for a while, and when it came back on, the white lights I have decoratively strung around our apple tree, grape arbor and back porch were only half lit. I was wishing I was half lit after that storm.

Speaking of being half lit, I’m sure our friends from N.C. are thinking we must have been on Saturday since we missed their parents 50th surprise anniversary party. They forgot to tell us what time to show up, so we didn’t go. But apparently they did tell us what time, by way of a voice mail on Thursday night after they got into town…but for some reason our voice mail notification wasn’t working Crappy Comcast so we didn’t actually get the voice mail until after the power went back on Sunday afternoon…guess it needed the power outage jolt to function properly or something. Not so ‘Comcastic’.

Princess Nagger was sorely disappointed by a trip to Toys R Us yesterday that she had been looking forward to for days. She had finally decided what she was going to spend her birthday money on (yes, she’s been saving it since November…) when she saw advertised her all-time favorite show has a Wii game out. 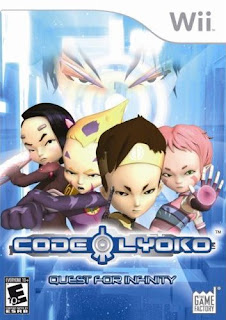 OK, so it’s been out since 2007, but since I’m usually fast forwarding through commercials she hadn’t caught on until this weekend. So we went over to Toys R Us yesterday, and they didn’t have it in stock. I felt so bad for her that I encouraged her to pick out a different game and I’d order her precious Code Lyoko online instead. Of course I’ll probably do it sneaky-like and make that a gift from the Easter Bunny because he rocks.

She chose a different game all right…specifically to annoy Dada. Yep, you guessed it, she got a Horse game. It’s pretty lame interesting, I did laundry helped her set it up and ended up playing for awhile. I’m hoping it’ll take her mind off the Code Lyoko game at least until the Easter Bunny can make his appearance. 🙂 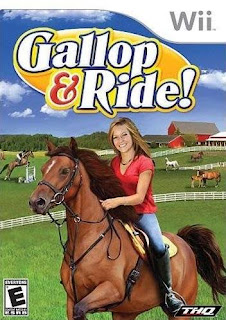 Last week I successfully had my archaic back filling replaced, but I’m thinking it’s not supposed to hurt when I chew on that side. So I guess I’ll be making another appointment to see what’s up with that. Not a big fan of going to the dentist.

Feeling Random? Well, you’re not alone. You can find all the cool Random People congregating over at Keely’s place. Her co-host has made a return as well, Kelly the Neurotic Mom at her new home, Baby Boogers. Head on over to both places and spread some Random love. You’ll thank me later. 😉