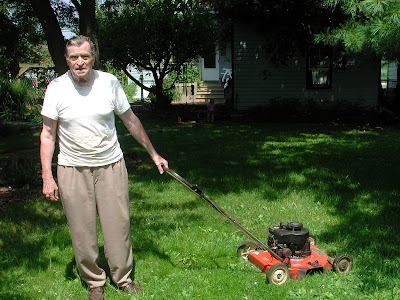 My Father-in-law in July 2004 – he came up once a week to mow our yard because it kept him feeling young. He was 82 when this picture was taken – he wanted to show it to the nurse that came to check on him daily at his retirement home. I still think it’s funny he’s the same age my late grandfather would be – apparently my hubby’s family were all ‘late starters’ when it came to having kids… 😉 He recently celebrated his 87th birthday – still going strong in spite of his ailing health, and is bummed he isn’t able to mow the yard.