Yet Another Jay and Deb Production.

I wrote my post then remembered it was Tuesday’s Tribute – how appropriate, since I was sort of writing a Tribute to my Father-In-Law, aka ‘Papa’… 😉
The Little Princess was ecstatic Christmas Morning to see the 3-in-one ‘sports’ table Mama and Dada had gotten for her – it’s one of those tables that you can switch the top from pool to ping-pong and to hockey. (Mama got it for a steal through Craigslist! *grin!*) She had a great time trying out all the games, but likes playing pool best. Especially when Papa came for a visit on Saturday – she greeted him in her Santa hat and stood quietly, expectantly, with a hopeful look in her eyes as she waited patiently for him to notice her new fun. He didn’t disappoint her, before he even took off his hat he asked if she would like to play a game of pool with him. I could see her visibly light up, she was so happy that Papa wanted to play a game with her.
Papa is a nice man – lots of people can’t really say that about their in-laws, but I’m lucky that I can. What’s unique about Papa is that he is the same age my grandfather would be if he were still alive today – Papa will be 87 later this month, and is quick-witted, cantankerous and sports the same unique sense of humor my hubby exhibits. He is the reason we moved to Pennsylvania – all those many miles from Seattle, where I was born and raised. He served in the Navy in World War II, and developed a blood disorder after his ship was shot out from under him. He survived, but had to stay in really cold water for an extended period of time, hence the condition that has his doctors scratching their heads in perplexity. When hubby and I moved out here in the summer of 1997, my father-in-law appeared to be on his death bed. Luckily he recovered, and has been going strong ever since, with only a few minor setbacks along the way. I think having his only son close by helped immensely, as well as the surprise arrival of his only grandchild. My hubby lost his mother to cancer when he was 18 – she was 53 at the time.

We cherish every moment we get to spend with Papa, we know that he won’t be around forever and are especially thankful for the times he gets to spend with the Little Princess – she’s getting to the age that she just might remember her Papa after its his time to ‘cross over’. His age has really started to show over the last year – especially since his girlfriend of 30+ years (Mrs. C, aka ‘Nana’) has recently been afflicted with Alzheimer’s and Dementia – she is 92. He spends much of his free time making sure she is being taken care of, and to make sure that she has a ‘constant’ in her schedule daily. She has her good days and her bad days – she remembers our cat and the Little Princess with affection, she just doesn’t remember ‘who’ they ‘belong’ to, bless her heart! Nana and Papa have been inseparable for years – when they were able, they traveled annually for over 20 years to her childhood country of Ireland and bringing back the best memories and photographs, entertaining us with wonderful stories. Because he makes sure they have meals together, and their ritual 9:00 pm phone call each night, she remembers him, in spite of her advancing condition, and is very thankful to have him as a constant in her life.

Papa loves to drive (and does it well in spite of his age! LOL!) so he really looks forward to being able to come visit us on the weekends when he is able – he used to come up once a week, even mowed our grass in the summertime because it made him ‘feel young’, but as his health has slowly started to fade, so have his trips – so we thoroughly enjoy them when we can. We visit him as much as we can in his retirement home, but he prefers coming here because it gets him away from, as he says, ‘the old people’. LOL! Here, for your enjoyment are some pictures of Pool Shark Papa playing pool with the Little Princess: 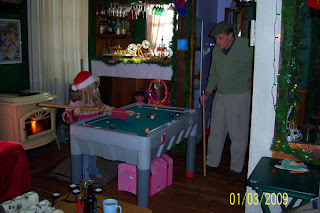 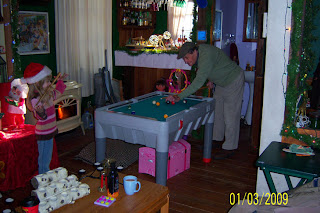 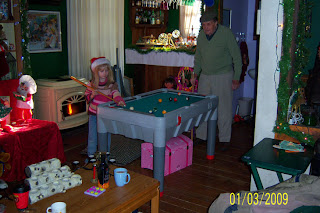 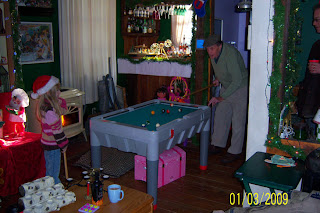 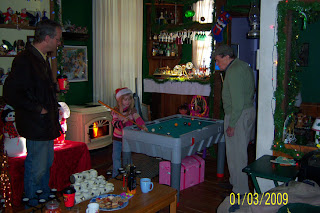 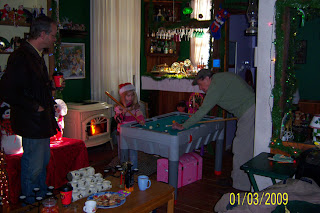 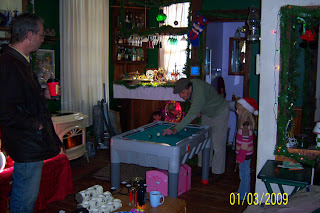 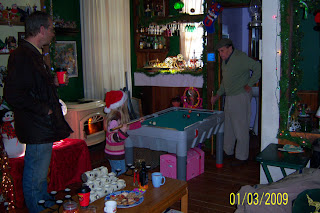 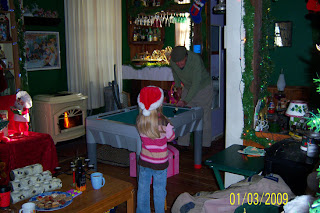 Ultimately Papa ‘let’ the Little Princess win – she was so proud of her accomplishment, and he sure made her day! 😉

Afterwards, as we were enjoying coffee and ‘Papa Cookies’, she donned one of her dress-up outfits from the dress-up trunk Santa left for her – Papa got quite the kick out of her pretending to be a Ballerina Princess… 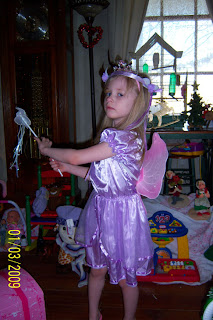 She noticed me taking pictures, and had to take a bow: 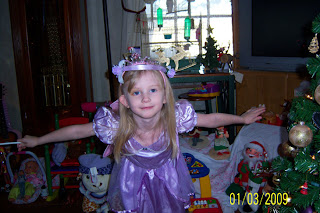 And for those of you following her ‘face-plant’ incident, as of Saturday this is how her eye looked: 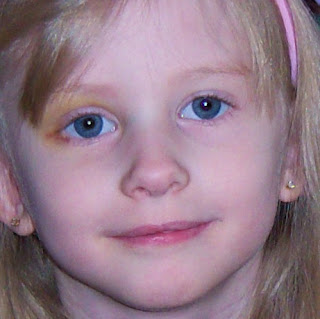 By yesterday you couldn’t even tell she had had a black eye over her Christmas break – she was happy that she didn’t have to go to school sporting a shiner! The only thing left was the healing cut on her eyebrow, but it was effectively hidden by her hair…heh, heh! We did run into her Kindergarten teacher at Target last Wednesday – so her teacher got to see her shiner, much to the Little Princess’s chagrin! 😉