Those of you following my blog the past few days are well aware of my unwavering resolve to get my Christmas decorations up and done before my birthday. It’s been a comedy of errors; getting started later than usual, then Mother Nature deciding to anoint my head with snow as I was hauling the boxes of decorations into the house from the shed. Then on Sunday, as I was putting together our wonderfully ‘real-looking’ 9-foot pre-lit tree, I realized that I had put section 2 and 3 together first, neglecting to put section 1 at the bottom…or so I thought. So I wrestled what I thought were sections 2 and 3 back off the base and reorganize them, I was more concerned about the fact that almost a full section of the tree’s lights were out. Fried. Kaput.

Helpful Hint: Don’t have your Christmas tree plugged into a timer that randomly turns things on and off multiple times. I bought one before we went to Seattle for 2 weeks last year for my birthday, figuring it would be a good idea to deter any shady characters from figuring out no one was home (including the dog), and help themselves to our valuables. Apparently the timer, being so ‘random’, caused an overage of current through the well-secured lights in the tree and fried about 200 bulbs. I bought one of those ‘Lightkeeper Pro’ thingamabobs to ‘fix’ the outage of lights. It worked for the sections of lights that only had a couple of lights burnt out, but for the sections that were literally fried, no such luck, obviously. I did have a bag of replacement bulbs that came with the tree, but I bought the tree 3 years ago and have no clue where I stashed that bag – you know, in a safe place so they wouldn’t get lost, so safe that I can’t remember where it is!

I spent hours today pulling burnt out bulbs and replacing them with bulbs from another string of lights I had – since the base on the extra string were too big, I had to actually remove the bulb itself and put it into the original base. No problem, I got a lot of the sections to come back to life. Except the very bottom section. And a random branch or two that steadfastly remained dark. So I searched online to see about getting replacement bulbs from the manufacturer, but I couldn’t even find that ‘make’ of tree anymore. Guess 3 years is a long time; they’re obviously not made or sold anymore. I was this close to just buying a new tree, but it’s definitely not in the budget, so I was going to have to improvise.

Since the section of lights that were fried was at the bottom, I had the bright idea (bright...get it?) to just run a singular string of lights to ‘fill in’ the dark places – problem solved! As I got started doing that, I noticed that the tree looked kind of ‘odd’ – like the bottom section and the next section up where switched…no, that can’t be, I was careful how I laid the sections out after my first debacle and was sure I had it right…must just be the shadows from the fact that the lights were out on the bottom section, once it’s lit up it should look perfect.

But did I pay attention and really look at the tree before I started putting the 200 or so ornaments on? Of course not! That would have been too easy! Besides, my daughter had moved some of the Christmas boxes from the dining room back into the living room – all by herself – anxious to help with the decorating of the tree. She and I decorated with gusto…then, after all the ornaments were in perfect positioning I stepped back. And groaned. And sighed. And shook my head. I messed up. Big time. 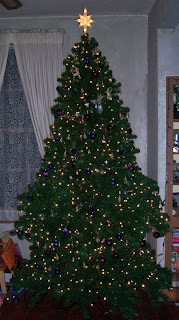 It was time to eat dinner, and afterwards we were watching Charlie Brown’s Christmas with our daughter. I kept getting distracted by the tree. I looked over at my husband and said, “You know what’s going to happen, don’t you?” He grinned and said “You’re going to be taking the whole thing apart and start over, aren’t you?” Me: “Yes. It has to happen.” Hubby: “You’re not going to be able to look at it for the next three weeks and not have it drive you crazy.” Yep, that’s what’s going to happen. Absolutely.

I just can’t leave it like that; it is going to drive me crazy. It already is! Best laid plans and all that jazz…I’ll be spending my birthday tomorrow stripping the tree and wrestling it into the proper configuration and redecorating it. Then, and only then, will I be able to finally relax and finish all the fun decorating – like my multitudes of Annalee figures that my sister-in-law got me hooked on. Or the cool Christmas train that plays Christmas music and drives our cat nuts as it circles under the tree. Or my Mr. Christmas stuff that enchants my daughter endlessly.

You can bet I’ll be putting some sort of color-coded stickers on the sections when I take the tree apart this time, so I don’t run into this issue again next year. The sections were marked when I bought the tree, but they had a card for each section hanging on the branches to identify them – of course I took the cards off, they looked tacky with the ornaments! (grin!) I didn’t have this mix-up issue the last 2 years I put this tree together – don’t know why it decided to be a bear this year. Maybe having the Little Princess ‘helping’ was the distraction, who knows – I just know next year I won’t even have to have a rematch with the tree, because I’ll play smarter. 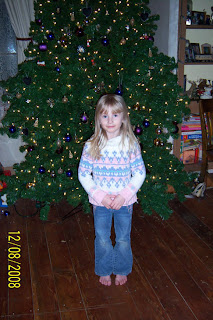