It’s been a very long day today…I did finally get my Christmas tree ‘fixed’ Tuesday, and got all the ornaments back on yesterday. So today I’ve been working like a mad woman all day long putting up the rest of my Christmas decorations so I can move on to other stuff over the weekend, since Christmas is only 2 weeks away and I’m so far behind in everything!

I did discover, however, that my faux pas wasn’t a complete ‘Blonde Moment’ when I put the Christmas tree together incorrectly…for some reason, when I hauled the bottom section out of the base to switch the bottom two, a single layer of branches stayed behind – so the post of the section that belongs to the bottom section was correct, but it was incorrectly attached to the second section instead of the first. Have no idea how that happened – must have been some snafu when I dismantled the tree after Christmas last year to store it back in the original box. No wonder that particular section seemed heavier than it should have, because it had one extra layer of branches attached that should have been attached to a different section. Confused yet?

Once I got the tree in the proper ‘order’, my brilliant idea of running extra lights to compensate for the sections that were burnt out turned into a bigger job – since the sections were now further apart – which meant I needed more strings of lights to fix the dark areas. No big deal, I had been wanting to make a trip to Target and see if there were any cool Christmas items that I had to have…I did buy myself a Birthday present and got a really cool lighted vine deer to add to my deer collection, so it made my quick errand more satisfying.

When I got to the section of the store where the Christmas lights were, there were two women blocking the isle chatting up a storm. Even when I said ‘Excuse me’, they only slightly moved and continued their gossip session, still blocking where I needed to be. So I reached around one of the women and grabbed a box of 350 lights so I could be on my way – I wanted to make sure I was home in time for the bus.

I got home in time to put some stuff away, then had to go out front and wait patiently for the bus. After getting filled in on what a great day my Little Princess had, I got out the box of lights to get that part done so my she and I could put the ornaments back on the tree and be done hopefully before Dada got home. I was horrified to see that I had grabbed a box of clear lights on white wire, not green wire. Ugh!

I did not feel like bundling up the Little Princess and make another trip to Target to exchange them, so I called my hubby at work to see if he would be a doll and stop on his way home to get the correct lights. That meant I was not going to get the tree redecorated on Tuesday, it would have to wait until Wednesday. Another day delay was not sitting well with me, but what could I do? So I decided to start unpacking the other multitudes of boxes of decorations and start putting those up so at least there would be less to do to finally get done.

About an hour later, I opened a box that I had simply marked ‘Christmas Decor’, and wouldn’t you know it, there was a box of 400 clear lights – on green wire – brand new that I had picked up at the end of the season last year. Murphy’s Law! I called and left a message for my hubby, knowing full well he probably was no longer at work, and his bad habit of letting his cell phone battery die and not have it on was also in play.

I was just finishing the final adjustment to the added lights when my hubby got home (and yes, he did stop and get me more lights!) so since we were going to go out for my Birthday dinner, I decided that Wednesday would be as good a day as any to finally get the ornaments put back on the tree. At least I could sleep easier now that the tree didn’t look so odd!  Wednesday morning I started the task of re-decorating the tree.

It went a lot slower than the first time around – I discovered was it was a bad idea to just strip the ornaments off the tree and lay them gently into a single box so I could work fast…the hooks on the ornaments either fell off or got tangled up with the others, so it was a bear to pull them back out to put them on the tree., especially when I was balancing high up on a ladder. I ended up dropping three of the ornaments, so they of course shattered when they hit the floor causing more work to clean up.

But at least the comedy of errors was finally over, my tree was finally up and my hubby said it looks like a ‘happy’ tree… Maybe because I’m happy it’s ‘fixed’, and I can rest easy now! Well, almost – I can now focus on the remainder of the decorations, then once I get all the boxes out of my living room and dining room, I can focus on the gifts I’ll be making, as well as my candy making and baking.

I guess I wasn’t the only one with ‘tree troubles’ this year, though – my brother called to wish me a belated happy birthday yesterday, and told me about his tree fiasco…they always get a fresh tree every year (which is what I used to do, when I also lived in the Seattle area – here in Pennsylvania, you don’t have as good of a ‘choice’ of fresh trees, hence the switch to an artificial one).

At any rate, their beautiful tree was all decorated and looking great, then they got up one morning to see that the tree had tipped over, there was water and shards of glass from broken ornaments all over their hardwood floors. Not something I would want to wake up to! They have one of those ‘smart’ tree stands that has a pull-release for when you take the tree down. It was ‘released’. My brother is not sure who the culprit is – their cat or one of their 7 year old twins – but he did not relish the task of cleaning up the horrendous mess during the rush of getting ready for work and getting the girls ready for school. I think I’d take my tree trouble over his tree trouble any day!

Here, at long last, is a picture of my ‘fixed’ tree – it looks much better without that funky ‘bulge’: 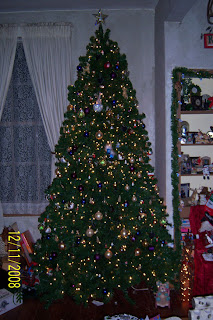