My hubby and I have talked often about getting another Blue Merle Sheltie – we had one about 10 years ago, and he was a wonderful dog. He was very smart – and dorky – so he fit into our family really well. Unfortunately, I had purchased him at a pet store and didn’t know his ‘heritage’…if you’re not careful you can get one that might eventually have some ‘issues’, and ours unfortunately had epilepsy. We were able to control his epilepsy with ‘doggie downers’, we had to make sure that we gave him a dose before a thunderstorm because the booming of the thunder seemed to be the ‘trigger’ of his seizures. At the time we lived in a townhouse, and had the misfortune of living next door to a guy who liked to have boisterous parties and had a huge sound system set up in the basement of his townhouse.
One weekend we were out visiting some friends and didn’t get home until about 3:00 a.m., only to discover a full-blown party going on next door with lots of noise and loud music. Since we weren’t anticipating any thunderstorms, we hadn’t given our dog any doggie downers before we left that evening, and when we returned home, he was in the middle of a seizure. It was heartbreaking, he would come out of it and run into things because his vision was impaired immediately after a seizure. And when he was finally calmed down, he would go right into another seizure. My hubby raced him to the emergency vet, who kept him overnight to take care of him, but no matter what kind of medication they tried, he would still wake up after a time and go right back into another seizure. We had to make the heart wrenching decision to have him put to sleep. 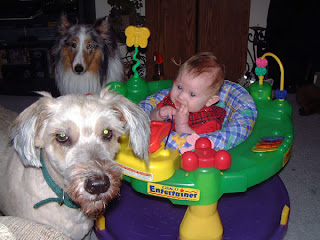 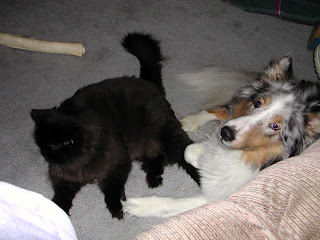 Our original Blue Merle Sheltie with our Persian 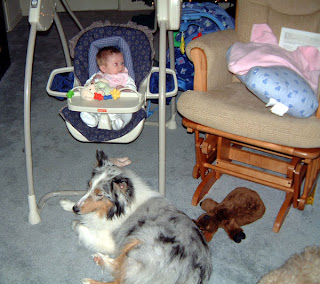 Our Blue Merle Sheltie was always guarding our Little Princess

Fast forward 5-1/2 years later, and we live in a big old house with a great backyard. We have one dog, a 2 year old (another Soft Coated Wheaten Terrier) who is King of his castle, but loves other dogs (our neighbor’s dogs come over to ‘play’ with him almost on a daily basis!). Having gone through the stress of having a dog who had seizures, while I liked the idea of getting another Sheltie (specifically a Blue Merle one), I was concerned that we would be facing the same hardships as we did with our old one. However, my hubby and I have done extensive research on the breed, and found a Sheltie Breeder who has ‘proven’ dogs and is highly recommended…so we’re going to set aside our fears and get a puppy.

The only thing I’m not looking forward to is the fact that we’ll be getting him in January, and typically January through March is when Mother Nature decides to deliver her worst weather for us – be it cold rain or snow. So it’s going to be an interesting prospect house breaking the new puppy during the cold winter months – but he’s going to melt our hearts and then some, so it’ll be worth all the midnight excursions into the back yard with him! Am I ready for a new puppy? Emotionally and Physically, yes. Mentally? Not so sure…but I’m sure once I cuddle him my mental status will resolve itself! 🙂

Here are pictures the breeder sent to us of the actual puppy we will be picking up towards the end of January (when he’s at 8 weeks – in these pictures he’s only 2 days old): 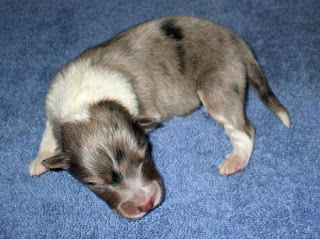 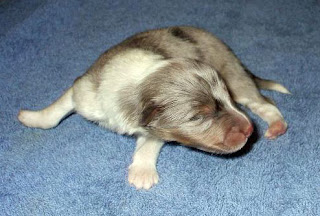 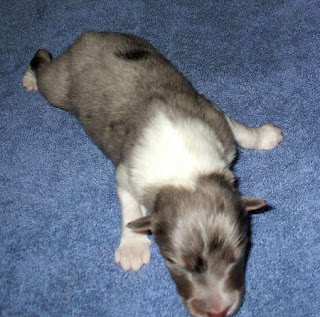 The more I think about it, and the more I look at his pictures, I’m really excited to be adding him to our family! Our Little Princess is impatient, she doesn’t understand the concept that the puppy needs to be 8 weeks old before he can move into our house away from his mommy. She’s already coming up with some unique names for him, we’ll decide that when we see him in person. Something to look forward to after the holidays! 🙂